A couple of helpful citizens assisted police in the arrest of a man who showed up at a Sacramento welding shop asking for a job in nothing but his birthday suit. The Sacramento Police Department received a call of a naked man causing a disturbance at Johnson Welding Fabrication. "I turned around and this naked man is walking into my shop," said owner Chris Johnson. 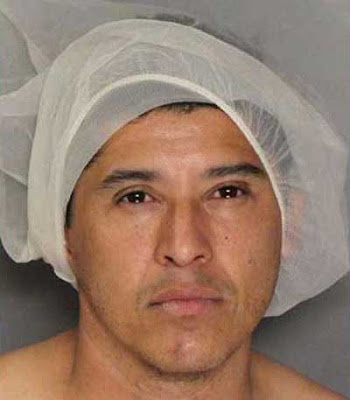 The man was speaking incoherently in Spanish and even told bystanders to call police, according to witnesses. When officers arrived to the scene the suspect, who has been identified as Jose Ayala, 36, resisted arrest and began to fight officers. Ayala grabbed a female officer's hair and refused to let go even after being taken to the ground by a pair of officers.

That's when Johnson, who'd been recording the incident on his phone jumped in to help. "I ran over, cracked him in the grill and they all three went on the ground," said Johnson. Johnson's brother Eric, who held a hamburger in one hand while lending his other to the effort, along with a cousin and a friend all pitched in to help the two officers subdue Ayala.

Ayala was described as being incoherent and appeared to be under the influence of methamphetamine or some other drug. He was taken to the hospital for to be checked out and then taken to the Sacramento County Jail where he's facing charges for resisting arrest, trying to escape, assault on a police officer and indecent exposure. He was being held without bail with an immigration hold, indicating he is apparently not an American citizen.
Posted by arbroath at 6:07 am
Email ThisBlogThis!Share to TwitterShare to Facebook

That guy is giving us MexiCANS a bad name.

They told him to wear his best suit to a job interview. It just happened to be his birthday one.

While I deplore the anit-immigrant sentiments of the Republicans, I wouldn't mind seeing this guy deported.