Intense flames engulfing a semi-truck hauling 36,000 pounds of frozen meat on Sunday caused a shut-down on part of I-40 in Albuquerque.

After almost four hours and a massive back-up on the interstate, things were eventually back to normal. A dog running in traffic that led to this whole thing. Police say a man saw the dog running on the freeway and pulled his car over. 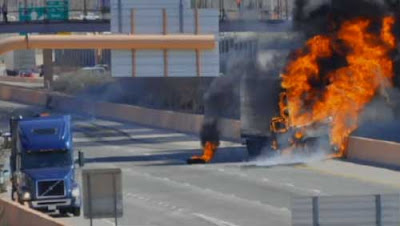 The man got out of the car and began walking onto the freeway to get it. That’s when a woman driving on the freeway slammed on her brakes – and a semi then slammed into her.

Police say the semi burst into flames almost instantly – and fire crews arrived quickly to put the fire out. The driver was able to escape just in time. The woman he hit is also okay. The dog died.

With news video.
Posted by arbroath at 6:02 am
Email ThisBlogThis!Share to TwitterShare to Facebook

The semi must have been driving right up the woman's arse to manage to hit her. Poor mutt.

The dog didn't cause this, the inattentive woman caused it. Poor pup. Humans suck.
--a.

I think the idiot running around on the highway caused the accident. I love dogs but I'm not about to chase one around on an interstate highway. Pull over and call the cops/animal control.