A dog named Wang Cai spends most days waiting outside the doors of a bank from 9am until 5pm, moving little, not accepting food, and chasing away other dogs from his “roost.” 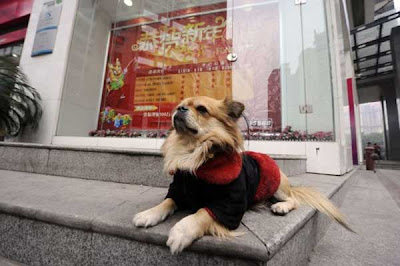 Nobody knows just when exactly Wang Cai began his daytime vigil in front of the Minsheng bank, but one street sweeper has seen the dog nearly everyday for the past two years. A bank security guard also reported seeing the dog, but noted that he seldom saw it waiting after 5pm.

Many pedestrians who frequent the area assumed the dog was homeless until they noticed it was clean everyday, would wear fashionable winter “jackets” and had his hair trimmed in the summertime. Wang Cai does indeed have a home, and his daily 9-5 vigil just so happens to coincide with his owner’s schedule, who works nearby.

Wang Cai was once homeless, and was found wandering outside 4 years ago when he was adopted by his new family — a possible explanation for his outdoorsy personality. Henceforth he accompanies his owner to work in the morning, waits stoically for 8 hours, and returns in the evening. The owner isn’t quite sure if Wang Cai is waiting for him or a previous master.
Posted by arbroath at 6:05 am
Email ThisBlogThis!Share to TwitterShare to Facebook

I'll tell you why he waits. Actually, my comment would come off as racist, and it is. I will keep it to myself.