A trip to a Carytown, Virginia, restaurant left one woman with a bad taste in her mouth this week. Dorsey McFadden said she is usually adventurous when it comes to trying new foods, but that she got more than she bargained for after ordering the Bleu Ball pizza at BlowToad. “It had a funny name but didn’t think too much about it. Later, I came to find out that the steak was bull testicles,” said McFadden.

She admits she didn’t specifically ask what was in the pizza, but when she saw the words swinging steak listed on the menu, she didn’t imagine that her topping would be coming from that part of the cow. “I was more astonished that they wouldn’t just tell you," explained McFadden. "It’s not a question of allergies for me, but it’s a question of full disclosure. Certainly I think there are some people who for religious reasons or personal reasons just wouldn’t want to eat that.” However, she said when she asked the waiter about the name, he chuckled and said their staff came up with the name together and just thought it was appropriate. 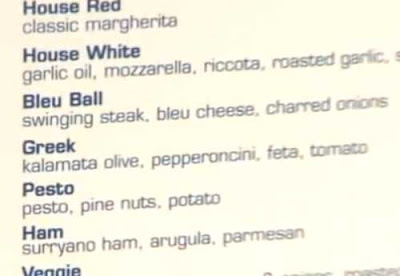 In addition, McFadden said the waiter never explained to her that the swinging steak on the menu is poached bull testicles. “I found out later through some friends that went there and ate the pizza and then found out what it was.” McFadden added. BlowToad's General Manager Chris Simons said he understand McFadden's concern. "We do put on the menu that it’s swinging steak. That’s another name generally used for it," said Simons. "We definitely put the burden of explaining on our servers as opposed to the menu. We don’t try to purposely hide it, though.” In fact, Simons said the pizza is one of BlowToad’s most popular dishes.

“It’s a great flavour. It does create a buzz when our servers explain what it is. People ask about it and we even send out samples to their tables and they try it. It’s mental for some people. If they can get past the mental aspect of it, the flavour is fantastic,” added Simons. Chris Gordon, an environmental health manager for the VA. Department of Health said that people do need to know what they’re eating when they go out to restaurants because of possible allergens. Managers at BlowToad said they will continue to do all they can to make sure customers are informed and walk away satisfied.

In my opinion, it does look like the restaurant is trying to slip this past as many diners as they can--just for the voyeuristic thrill of it. I'd be pissed, too.

Allergic to... beef? If that were possible, wouldn't the word "steak" in the name kind of tip a person off?

I don't see the problem with eating testicles when people will happily eat all sorts of arguably unsavoury parts of an animal. Indeed if you east anything made from MRM who knows what part of the animal you're eating. Round here we like to say that fast food is made from 'oles; ear'oles, eye'oles and arse'oles.

The restaurant owner is being disingenuous. I've worked on a ranch, and participated in the round-up, branding, and neutering of calves; and have never heard of this expression, and neither has Google. Rocky Mountain Oysters, yes. Call it what is, don't rely on wait staff to explain what the food is, problem solved.