A man who stripped down to his underwear and crawled across a frozen river to rescue his trapped dog has been condemned by firefighters. According to an eyewitness, the man fell into the River Stour, in Dedham, Essex, at about 10:00 GMT on Sunday but managed to climb out with the animal. 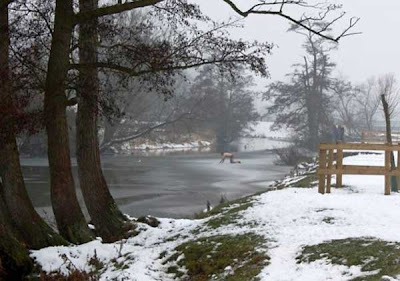 Fellow dog walker Paul Wenborne, who witnessed the incident, described it as a "foolish act of bravery". An Essex Fire Service spokesman said: "This was extremely dangerous."

Mr Wenborne, 52, of Rayleigh, Essex, said he was amazed at the man's actions. "I was with two friends and we couldn't believe what we were seeing," he said. "He stripped down to his pants and started crawling across the ice. 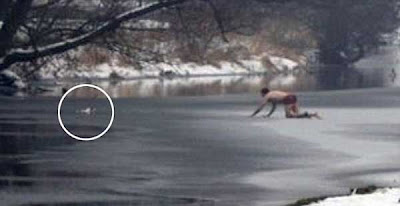 "About a yard or so from the dog, he fell in but managed to get hold of the dog and put it on the ice. He then had to swim two or three yards and then crawl back on the ice to dry land. He put his clothes back on and carried on. It was a foolish act of bravery."

I reckon he is a bloody hero. I hope that if my best friend was stuck like that, I would have the (shrinking) balls to save him.

I don't think I'd be able to just stand by and do nothing either but at very least phone the fire brigade first... and then try it yourself!