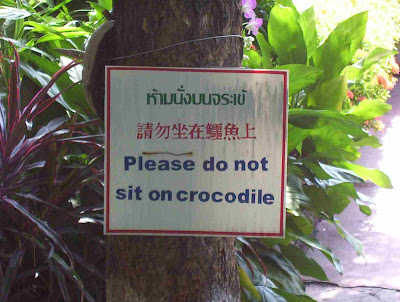 Perhaps someone better than me can confirm/refute, but that really does appear to be what it says.

please, do not, sit, (something) crocodile, fish, on.

That's definitely what it said in Chinese.

Li Hong: What's the symbol between sit and crocodile?

It's the Chinese character 在. It's a generic term that serve as a pointer to what the next character would describe. In this case it represents 'on'. It can also be for 'in', 'at', 'be'. I think there is a English term for these pointers, but I have forgotten.

The character 上 means up/above. It complements 在 in this case because 在 is pointing at the crocodile and 上 is pointing the surface of the croc. In other words, a literal translation would be:

You learn something new every day! Thanks Li Hong. My abilities thus far are limited to just about being able to read Chinese menus. (Though I still have to sit in the honky section) ;)

I assume this was such a problem that it merited a sign? ;)

@Ratz,, you are welcome =).
@Anonymous I believe it's for people who think it's cool to pull such a stun and still think they would have time to outrun the crocs. =p