A purple squirrel was found in Jersey Shore, Pa., on Sunday, by Percy and Connie Emert. "We have bird feeders out in our yard, and the squirrels are constantly into them," said Jersey Shore resident Connie Emert. 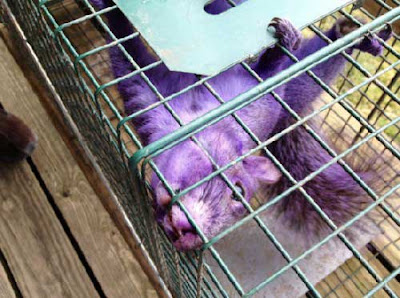 "My husband traps them and then sets them free elsewhere so they don't get into your bird feeders." Emert said she had spotted a purple squirrel on her property but no one believed her.

"I kept telling my husband I saw a purple one out in the yard. 'Oh sure you did' he kept telling me," said Emert. "Well, he checked the trap around noon on Sunday and sure enough, there it was. The squirrel's been eating peanuts. That's what we used in the trap," she continued. 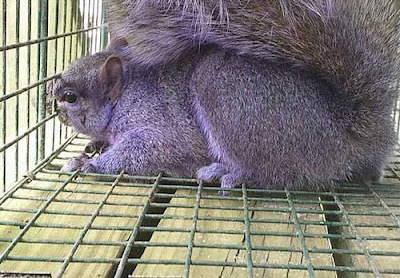 The Emerts currently do not know why the squirrel is purple. "We have no idea whatsoever. It's really purple. People think we dyed it, but honestly, we just found it and it was purple." The Emerts havw now released the squirrel back into the wild.
Posted by arbroath at 6:06 am
Email ThisBlogThis!Share to TwitterShare to Facebook