A rabbit has been found in a Fife town with both its ears cut off in what vets believe was a malicious attack with a pair of scissors. The white crossbreed, which has been named Susan, was found in Buckhaven on 1 February.

She is now being cared for by the Scottish SPCA who are looking for a good home for her. The Scottish SPCA said cutting off Susan's ears would have caused her a "great deal of pain and suffering". Kenny Sharpe, Scottish SPCA assistant manager, said: "Poor Susan was found outdoors in the cold and could be a stray, although she may have been abandoned. 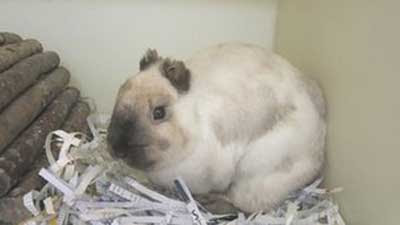 "Both her ears have been cropped off, which is highly unusual. The vet who examined her thinks they were cut off with a pair of scissors in a malicious attack as it is extremely rare for both ears to be removed for medical reasons. This would have caused Susan a great deal of pain and suffering and we can only imagine how frightened she must have been."

He added: "Thankfully, this is an old injury which has healed and Susan seems to cope well. Susan is very friendly and trusting of humans, despite the obvious trauma she has been caused in the past. This gorgeous girl has clearly not had a great start in life and we'd really like to find her an owner who can show her the love and care she deserves."
Posted by arbroath at 6:02 am
Email ThisBlogThis!Share to TwitterShare to Facebook

Easter is right around the corner and it will be her turn to shine. Jesus would want it this way.

I am not a robot but these words are quite often bloody hard to read. You all may be missing out on my pearls of wisdom more often than not as I am sometimes unable to read what the letters are and cannot be bothered fluffing around