95-year-old climbs out of coffin six days after ‘dying’

A 95-year-old Chinese grandmother terrified her neighbours in the village of Liulou, in Beiliu, Guangxi Province - by climbing out of her coffin six days after she 'died' Li Xiufeng was found motionless and not breathing in bed by her neighbour more than a fortnight after tripping and suffering a head injury.

When he failed to wake her up, Chen Qingwang assumed the frail grandmother had passed away in her sleep. Recounting his daily visit to bring the elderly lady breakfast, Mr Qingwang, 60, said: "She didn't get up, so I came up to wake her up. No matter how hard I pushed her and called her name, she had no reactions. I felt something was wrong, so I tried her breath, and she has gone, but her body is still not cold." 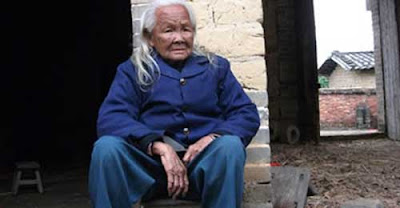 According to tradition, the 'dead' woman was laid in her coffin ahead of the funeral for friends and relatives to pay their respects. But the day before the funeral, Mr Qingwang arrived at his neighbour's house to find the coffin empty and the corpse gone. "We were so terrified, and immediately asked the neighbours to come for help," he said.

After searching for the missing body, the villagers were stunned to find Mrs Xiufeng sitting on a stool in her kitchen cooking. She reportedly told villagers: "I slept for a long time. After waking up, I felt so hungry, and wanted to cook something to eat. I pushed the lid for a long time to climb out." A county hospital reportedly believes Mrs Xiufeng suffered an artificial death, during which the person has no breath, but the body remains warm.
Posted by arbroath at 6:04 am
Email ThisBlogThis!Share to TwitterShare to Facebook

Edward Cullen? Is that you? You look so different in Twilight.