Flying a skull and crossbones flag as part of their child's pirate play has landed a Lincolnshire family in hot water with the district council. The Tattershall, Lincs, couple have been instructed to take down the pirate flag from their garden because, the council says, it breaches advertising regulations. Ronnie Ford-Kennedy and his partner Sara Steele were amazed to receive a letter on Friday from East Lindsey District Council's planning enforcement department advising them that they need advertisement consent to display the skull and crossbones flag. The flag is in their Browning Court garden erected on a fishing pole, not a proper flagpole. 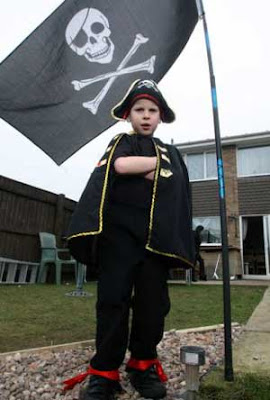 The letter states the pole should not exceed two metres in height and requests Mr Ford-Kennedy and Miss Steele to remove the flag and pole within 28 days. The letter states it is an offence, prosecutable in the magistrate's court, to display an advert without consent from the council. Mr Ford-Kennedy said the flag has been put up for Miss Steele's seven-year-old son, Anthony, who has Asperger's Syndrome. He said: "Anthony likes playing pirates and when I have my daughters here, they all play pirates together. The flag has been up for three months. I found the letter shocking to say the least.

"Anthony has to be told things prior to what is happening because of his syndrome. We've told him we've got to take the flag down, but he doesn't really understand and neither do we. If it just affected me I would not be bothered but this is going to affect a little boy." Miss Steele said: "This is a child's toy. It's sad that someone has reported a child's toy to the council. We don't understand why it constitutes as advertising when it is just a standard pirate's flag in our garden." When they contacted the council, they were told they can fly any nationality flag but not the skull and crossbones. 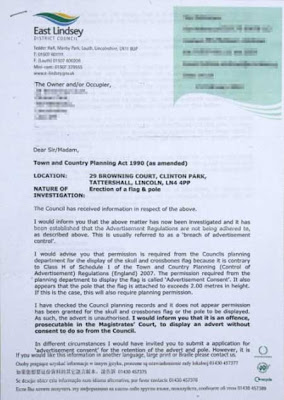 Before putting up the skull and crossbones, Mr Ford-Kennedy flew an England flag without complaint for three years.The couple said they will take the flag down within the 28 days, reduce the height of the pole, and fly a new England flag instead. A spokesman from East Lindsey District Council said: "The flag flown has been brought to our attention as it is a breach of advertising regulations. As such, and in line with planning law, the district council has written to the family concerned asking that it is taken down. Rules around what flags are acceptable are contained within planning legislation and we'd be happy to provide advice and guidance on what is acceptable."
Posted by arbroath at 6:00 am
Email ThisBlogThis!Share to TwitterShare to Facebook

What kind of a person reports something like that?
What kind of people takes it seriously?

I hope it does go to court. The magistrates would throw out the case and the council would be left with a legal bill. Why? Because there is one important part of the law that they council's idiot employees have missed. The regulation they have chosen to enforce applies solely to advertisements - that flag could not be considered an advertisement and so the regulation does not apply.

What exactly are they supposed to have been advertising again? Rape and pillage?

Another idiot council... really. The level of stupidity in England is reaching great proportions.