Italian canine traveller Pamela followed in her owner's footsteps and boarded a train in her Tuscan hometown of Arezzo on Monday, heading towards Bologna. Unlike previous journeys, she was all on her own. 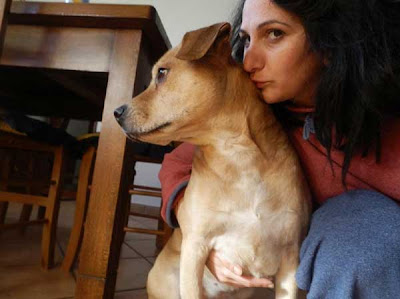 The female pooch walked herself to the railway station in the town's centre, waited on the appropriate platform at the right time, then boarded the regional line towards the home town of her owner's girlfriend, sitting in the same car in which she usually travelled when they would make the trip

After the dog disappeared during a walk, Luca, the dog's owner, plastered his hometown of Arezzo with fliers. Three sleepless nights later, he was contacted by an animal shelter in Florence where train staff had left Pamela after noticing the unaccompanied dog on the train.

Pamela was identified thanks to her microchip and the four-day search ended happily on Thursday when the tawny labrador mix was returned safely to her owner. "We can finally sleep in peace now that she is back," said an elated Luca.
Posted by arbroath at 6:04 am
Email ThisBlogThis!Share to TwitterShare to Facebook