A man was arrested after he jumped on the hood of a police car and shouted his name.

Sacramento police said an officer was sitting in a patrol car in the 2600 block of Fairfield Street in the Noralto neighbourhood at about 1 a.m. when a man walked up and leaped upon the hood of the vehicle. 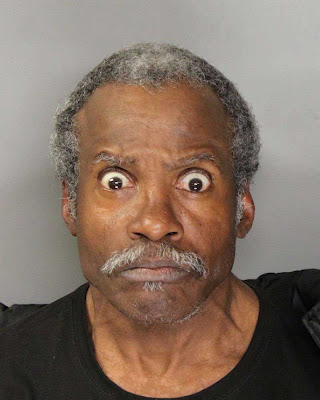 He then yelled his own name, jumped down and ran away. The jumper was easy to search for because he was described as wearing a dark puffy jacket, a sombrero and a boxing glove on one hand.

Jesse James Thomas, 55, was found nearby, lying in the street. Thomas was arrested for suspicion of being drunk in public.
Posted by arbroath at 6:11 am
Email ThisBlogThis!Share to TwitterShare to Facebook

Only in Sacramento. You have to love that dump of a city. Great vegan restaurant there.