Its sign has been stolen over and over, but one thing that can't be taken away from Katies Crotch Road is its mystery. The road with the intriguing name off Route 16 connecting Embden and New Portland has had its share of vandalism and controversy, enough so that town officials unsuccessfully proposed at last Saturday's annual Town Meeting to change the name to Katies Road. But while residents are attached to the name, no one is sure which story about its origin - some more colourful than others - is the right one. Marilyn Gorman, 78, said the road has been known as Katies Crotch since long before there were street signs in town. 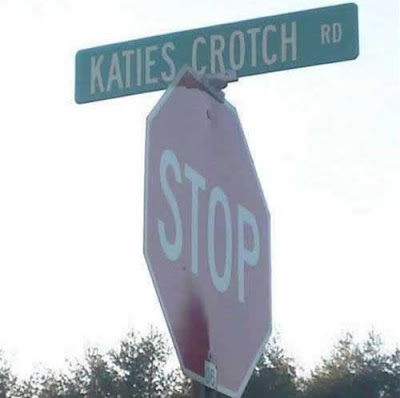 Gorman has lived in adjacent New Portland all her life and has researched the area's history as secretary and treasurer of the New Portland Historical Society. "I have never found anything written down about the Katies Crotch Road," she said. The most logical story she's heard about how the road got its name came from Harold "Bucky" Emery, who was ahead of her in school. Emery told her that his father told him a family with the last name Katie used to live at the intersection with Route 16, and "crotch" referred to the V shape of the intersection. "Where the house would have sat would have been in the middle of what you'd call the crotch," she said. "If that part of it is true."

People tell different stories about the name of the road, she said, but "I think they make up things." One story is that there used to be a tavern on the road run by a woman named Katie. In another story, likely made up, a woman named Katie used to live on the road and would sit on her porch while wearing no underwear. Gorman has looked for people with the last name Katie in the Embden town records but hasn't found any, though records are incomplete. And with another generation disappearing, it's likely the origin of the road's name won't become any clearer. 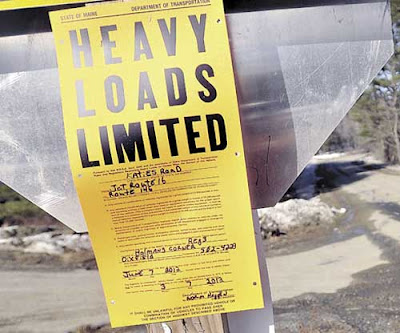 "All the people I knew as a kid have passed on. All my relatives that were here for generations, everybody's gone," she said. Gorman thinks Embden residents made the right decision to keep the road name, even though it will probably mean they continue to pay to replace stolen road signs. Town officials said it cost $200 last year, not including labour, to replace the road's one sign. "I don't like messing with history, changing what has been, unless there's a darn good reason for it," she said. "That's what it's always been. That's there, and that's the way it is."
Posted by arbroath at 6:06 am
Email ThisBlogThis!Share to TwitterShare to Facebook

This sort of thing annoys me. We had a Butt Hole Road (that's butt as in archery butt) not far away from us. The road had been called that for a long time but the local authority changed the name to Archers Way because they said residents had complained that the name was offensive. I spoke to several of the residents and they all told me they had no problem with the name and one pointed out that they wouldn't have bought the house had they found the street name offensive.

IOW it was just the council interfering and wasting tax payers money and blaming the local residents for it.

Do you guys know why the street was given such a name?