An unassuming Fife guinea pig is jumping for joy after being confirmed among the world's elite as a new Guinness world record holder. Truffles, lured only by the temptation of his favourite cucumber snack, has smashed a world record for the longest jump ever recorded by a guinea pig. 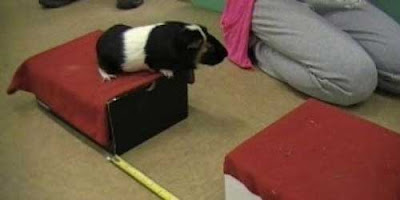 While it may be some way off human world record of over 29ft, Truffles showed his class by vaulting 30cm with ease, breaking the existing record by nearly 10cm. Now the galloping guinea pig is a star in the making — much to the delight of his owner Chloe Macari, 13. Scout Chloe roped in everyone from the 41st Scouts to witness Truffles in action.

With detailed requirements for setting a record, official witnesses appointed, cameras and camcorders at the ready, a hush descended on the James Spence Hall as Truffles limbered up. With everyone making sure he jumped of his own free will, and was in no way pushed, prodded or coerced, he took a running leap — straight into the record books.

Chloe's mum, Angela said: ''I never thought I'd ever have a world champion in my house!'' She added: ''It was a great night — you should've seen the faces of the Scouts — and my dad, John, was the proud granddad, parading around with Truffles. It was absolutely lovely.'' A Guinness World Records spokeswoman said: "The longest jump by a guinea pig was achieved by Truffles, who cleared a gap of 30 cm (12in) in Rosyth, Fife, UK."
Posted by arbroath at 6:07 am
Email ThisBlogThis!Share to TwitterShare to Facebook

30cm? We used to have a guinea pig who could easily beat that and that wasn't just horizontal, he could manage a foot horizontally when jumping up onto a six inch high step.

The BBC have the story...