A tiny wood mouse stands up to a cat and scratches it on the nose. Looking like a scene from a Tom and Jerry cartoon, the fight saw 'Jerry' escaping under the fence and back into the woods where 'Tom' had earlier caught him.

The cat had brought the mouse into a garden in Reigate, Surrey, hoping to spend the afternoon chasing him before snacking on the little critter. But he bit off more than he could chew when the mouse turned on him in a battle to survive. 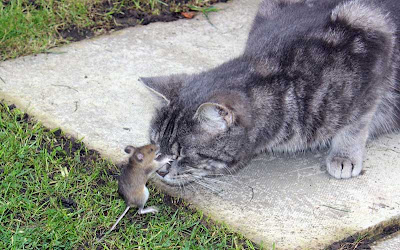 Stephanie Evans said she came outside and saw the mouse in the cat's mouth. He put the mouse down and instead of running away the mouse just fronted him. The cat was so shocked he just stood there.

She says she thinks they must have tussled for about 10 minutes, before the little mouse disappeared under the fence. A neighbour later found the mouse in his greenhouse. He said "he refused to run off. He was probably waiting patiently to smash a flower-pot over the cat's head!"
Posted by arbroath at 6:01 am
Email ThisBlogThis!Share to TwitterShare to Facebook

The mouse could just be infected with toxoplasma gondii. It's a parasite that will make mice and rats lose their innate fear of cats. Doing so increases the chance of the mouse being eaten and so the parasite can continue its life cycle in the next host.

Very interesting. If that's true, the cat should be thankful he didn't eat him!