A cat born with his back legs back to front has been given a new lease of life after pioneering surgery. 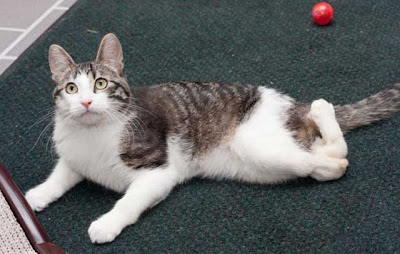 Corky was found by little boy dragging himself along a pavement in Fargo, North Dakota, and was taken into a shelter, where he was due to be put down.

Corky the night before he had surgery.

But Gail Ventzke and Carol Stefonek, co-founders and directors of CATS Cradle Shelter, heard about the brave moggy and were intent on saving his life. The seven-month-old kitten suffers from a congential deformity known as ‘Bilateral Arthrogryposis', which causes his legs to be the wrong way round. 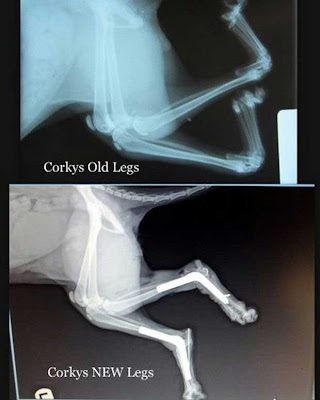 His limbs were also criss-crossed like a corkscrew, leading staff at the shelter to name him Corky. The courageous kitty learned to drag himself around on his two front paws at the CATS Cradle shelter, until Gail and Carol asked for the help of a local vet.

Dr. Dan Burchill of Castleton Veterinary Services invented a surgery to bring Corky's back legs the right way round. Corky is still in bandages but thanks to intensive physical therapy sessions he's doing well.
Posted by arbroath at 6:07 am
Email ThisBlogThis!Share to TwitterShare to Facebook

What a beauty. My cat Louie looks just like him. I am not sure why the surgery was done. The cat walks just the same as ever, except his legs no longer looks deformed. It seems the only purpose it served was about aesthetics.

It's not aesthetics. The kitten was about to be put to sleep because it would be hard to find someone to adopt him otherwise. He's still young so once the bandages come off, with physical therapy, he might be able to learn to walk normally.

This was done to make a few people with severe psychological issues feel better about themselves. The cat should have been put down as a kindness.

As a society, we're judged on how we treat our most helpless members. I think helping this cat was a good idea.

He's a beautiful cat and I hope he does well :)

We should give awards for excellence to heroes like Dr. Burchill!

NellieVaughn Why would it be about aesthetics? Do you expect the cat to have had his legs fixed and be able to walk the correct way, straightaway? He has lived life till now not being able to use them, with continued practise he will hopefully learn to use them properly.

and the Anon troll, Put down just for having legs wrong way around? Seems the only person with psychological issues is you. Unfeeling, cold sociopath I believe.

Why is there so many mean comments? Why can't we have something nice to say and if you don't then don't say it at all. Yes it could have been for aesthetics so that someone may adopt him, but you should love those whom may not look "right". I also believe that if his legs where kept the way they were he would have had more leg problems sooner than most cats. This surgery will prolong his life, and that is a happy thought to know.