Locals in Hradok, Slovakia, are living in fear of a kung fu guinea pig. The pint-sized ninja terrified dog walker Marta Domotorova when it attacked her Hungarian pointer dogs during a stroll on heathland near her home. 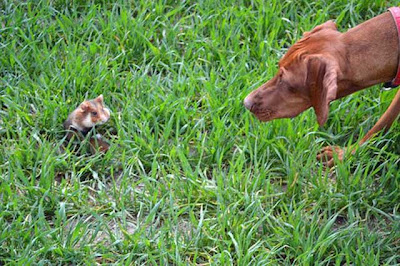 With a series of spinning kicks and leaps the fearless rodent saw off both the hapless hounds as they tried to play with it. "Bona started barking and Meggie wanted to sniff it. 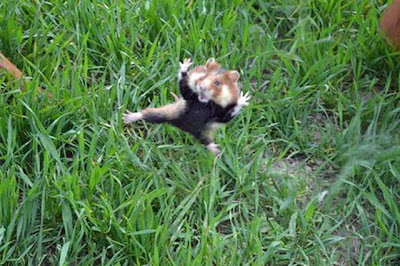 Local wildlife experts believe the furious furball is a household pet that's either escaped or been abandoned. "It's not the first time we've heard of this. These creatures are usually docile family pets but when they feel threatened they will fight for their lives like any animal that thinks it's been cornered," explained one.
Posted by arbroath at 6:03 am
Email ThisBlogThis!Share to TwitterShare to Facebook

That's not a guinea pig, it's a hamster. Makes you wonder about the local "wildlife experts" if they can't tell the difference between a guinea pig!

And if these "experts" think guinea pigs are violent then they are crazy. Cavies seldom fight even among themselves. Hamsters on the other hand can be extremely violent.

Im gonna go out on a limb and claim the second pic is a photoshop ;)

It's may not be shopped. Sometimes hammies will really do that to try to scare oponents.

That sort of thing is common in the animal kingdom.

Lemming, not guinea pig or hamster. They're psychopaths who will attack anything that gets too close.

@anonymous and other similarly skeptical minds. It's a real species of hamster, just as Gareth says! A long while back Arbroath posted another video of a European/black-bellied hamster. It was spitting mad and did this amazingly ferocious flying squirrel-like thing through the air. It was the first time I had ever seen a hamster outside a pet store, let alone such a tenacious yet miniscule beast. Who knew "wild hamsters" existed? (well, probably a lot of people other than I) Anyway, ever since I have had a new appreciation for the common pet store hamster and his primal roots!

"both dogs are harmless and just wanted to play".

Well if only you'd told the hamster that I'm sure it wouldn't have got quite so upset at those two huge things that lumbered over to it!