A 5-year-old Australian boy is back on his feet recovering from surgery after a rare attack by a fish described as a cross between a tadpole and great white shark. Tom Horn, 5, of north Queensland suffered horrific wounds to both feet when he was savaged by the 30cm-long tropical fish while wading with family in shallow water off the beach on Thursday Island. 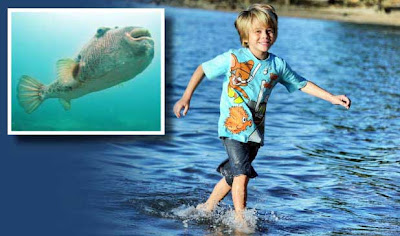 Doctors at Cairns Base Hospital had to operate twice on the huge chunks of flesh gouged out of the child's feet in the mauling by a fish believed to be a ferocious pufferfish (feroxodon multistriatus) two months ago. Surgeons plan to write a report for a medical journal to document the rare case that took about 30 stitches, and two weeks in hospital on antibiotics, to guard against marine infection, treat and heal.

"You can't go anywhere in the tropics without some wild creature trying to take a chunk out of you,'' joked Tom's father, Senior Sergeant Jamie Horn, who witnessed the attack on January 29. "They were unbelievable wounds, the ball of his left big toe was missing and a chunk of flesh was missing out of his right heel,'' said the officer-in-charge of Thursday Island police. "You would not think a little puffer fish could be so vicious.'' 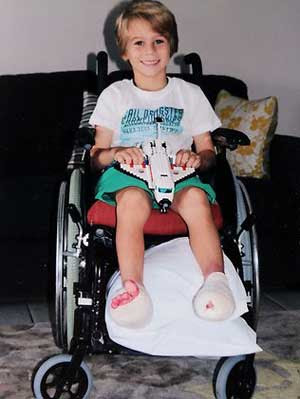 In the film, Finding Nemo, Bloat the pufferfish is a gentle character more akin to a faulty blow-up toy. But in the wild, they are described as "a cross between a tadpole and a Great White Shark'', capable of taking off fingers, toes and ears. "Tom's wounds have healed up beautifully, and fortunately he's not scared of the water,'' said Sgt Horn. "But lots of other stories about close encounters with pufferfish have emerged since his attack.''
Posted by arbroath at 6:00 am
Email ThisBlogThis!Share to TwitterShare to Facebook