A 28-year-old man from Gävle in eastern Sweden, previously in trouble for his “llama-like” spitting in strangers’ faces, went amok while in hospital, injuring staff in an alleged nutmeg induced rage. The man was behind a series of incidents in central Gävle in January, where he spat unknown people in the face “like a llama”.

A month later, police arrested him on suspicion of harassing two sisters by sending them death threats and rude comments via text messages. The man was then held in custody by police until his verdict on Friday. During the trial, the full extent of the man’s aggressive behaviour became known when it was revealed that he had gone berserk while in hospital last summer, injuring one of the hospital employees badly. 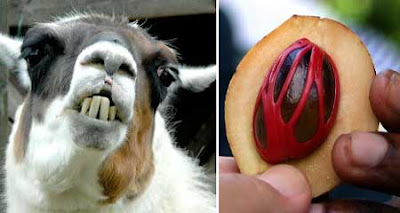 The man had been held sedated for days, deemed too dangerous to rouse. According to the 28-year-old, he had been consuming too large a quantity of nutmeg, which contains an amphetamine-like substance, inducing his raging and violent condition. Hospital staff had tried to wake the man earlier, but were forced to sedate him again due to violent behaviour.

However, when they tried again, the man went berserk and made a break for it, kicking one guard’s leg so badly that it was dislocated. He also tried to strangle the female guard before being overpowered. The 28-year-old was sentenced on Friday by the Gävle District Court to four months in prison for illegal threats, harassment, damage to public property and threatening behaviour.
Posted by arbroath at 6:07 am
Email ThisBlogThis!Share to TwitterShare to Facebook