The Eternal Flame in Bishkek, the Kyrgyz capital, has flickered, faded and died after a utilities company cut off the gas to the World War Two memorial.

Kyrgyzgas justified turning off the gas supply to the monument, built during the Soviet Union to honour the millions who died fighting Nazi Germany, by claiming it was owed nearly £6,000 by the authorities. The image of an extinguished Eternal Flame is an embarrassing blow for Kyrgyzstan, one of the poorest of the former Soviet states in Central Asia. 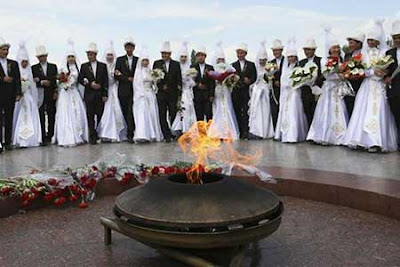 It has few mineral resources and little arable land to develop. Many cities across the former Soviet Union pay homage to their war dead by maintaining a gas-fired flame which is never extinguished. Soldiers often guard the flame and it takes centre stage at the annual May 9 military parades.

authorities in Kyrgyzstan are hoping to broker a deal to re-light the flame before this year’s parade. At the Kyrgyz military parade, the Kyrgyz president and other dignitaries stand before the Eternal Flame while soldiers lay wreaths around it.
Posted by arbroath at 6:05 am
Email ThisBlogThis!Share to TwitterShare to Facebook