Woman killed man by squeezing his testicles in parking dispute

On April 19, a female scooter rider killed a man by squeezing his testicles during a parking dispute, in Haikou City, Hainan Province, China. 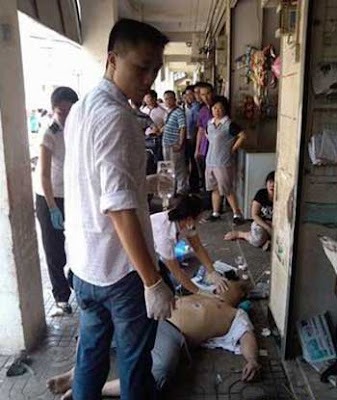 The 41-year-old woman rode on her scooter to an elementary school in Meilan District, Haikou City to pick up her child. When she wanted to pack her scooter in front of a shop, she was rejected by the shop owner, a 42-year-old male.

The two parties soon fell into a quarrel, and then a physical confrontation. The furious woman called her husband and brother to come help her, which resulted in a more violent fist fight. 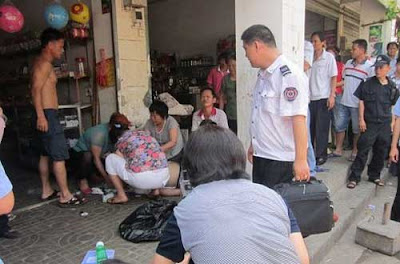 During the fight, the middle aged woman manged to grab the man’s testicles, and squeezed them until he finally collapsed on the ground. The man was immediately rushed to hospital, but unfortunately died there despite of efforts.
Posted by arbroath at 6:04 am
Email ThisBlogThis!Share to TwitterShare to Facebook

Isn't there a Bible verse about this sort of thing??? ;)

Can we have another flood now?

At least his jaw wasn't dislocated.

I think I was married to that lady's sister!

I was married to her first!

Crazy women... you don't see guys walking up to random women and putting their hands in their pants to cop a feel.

That lady had some pair of balls to do something like that.She's NUTS.! Kung Fu grip.! Maybe she was getting robbed..and had to hold on too the family jewels so no one would take them.!!