A young mother has been taken to court after ignoring warnings to stop having loud all-night parties. Leanne Fennell, 20, told her neighbours a poltergeist was to blame for the thumping music and rubbish strewn in the garden.

She has now been evicted from the home in Wexford Avenue, on the Greatfield estate in east Hull. Hull City Council prosecuted Fennell after she ignored a noise abatement notice served earlier this year. Council officers also seized four televisions, four DVD players and a CD player, which will now be destroyed. 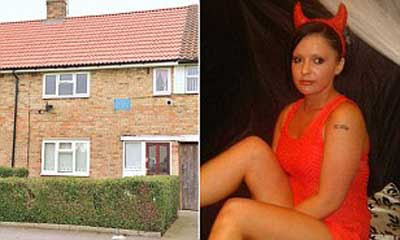 One neighbour, who did not wish to be named, said: "She told us a poltergeist would keep switching the music on really loud when she was in bed." Loud music was heard coming from Fennell's home on January 13, 16, 18 and 19, after the noise abatement notice had been served by council nuisance officers. She also ignored warnings to clear rubbish from outside the property.

Fennell was found guilty in her absence of four breaches of the abatement notice banning loud music and raised voices and another requiring her to remove rubbish from the garden. Hull magistrates ordered her to pay fines of £370 and costs of £500 to Hull City Council.
Posted by arbroath at 6:02 am
Email ThisBlogThis!Share to TwitterShare to Facebook