Japan's fugitive penguin recaptured after 82 days on the run - Update

A young penguin which escaped from a Tokyo aquarium has been caught after more than two months on the loose in the Japanese capital.

The Humboldt penguin scaled a wall and slipped though a fence at the Tokyo Sea Life Park in March. It has since been spotted several times swimming in rivers running into Tokyo Bay, but had eluded keepers. 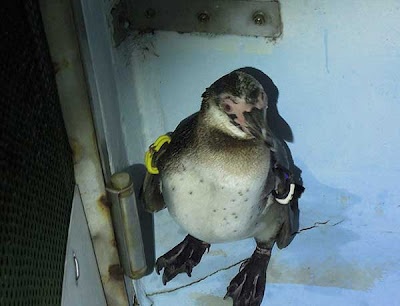 The one-year-old fugitive was finally recaptured on Thursday evening. Two keepers went to a river after a sighting of the penguin was reported in the morning. They managed to catch it later that day on the river bank, a spokesman for Tokyo Sea Life Park said.

The penguin - known only as 337 - was being examined by experts but appeared to be in good condition. "It hasn't lost weight," the spokesman said. "It hasn't got fatter either but its health seems good."

Many thanks Ratz!
Posted by arbroath at 6:03 am
Email ThisBlogThis!Share to TwitterShare to Facebook