A lady in Ballston visited a Stewart's Shop and Curtis Lumber within a few minutes of each other on Tuesday — with no clothes on. "Have a good day," the woman told one lumber yard employee as she traipsed out.

Curtis Lumber manager Bob Eakin, who was not at work at the time, said the woman asked a couple of employees what time it was before she left. "No one wanted to say much to her," he said. "It's not a situation you want to be involved in." A picture of the incident was captured on a Curtis Lumber security camera. 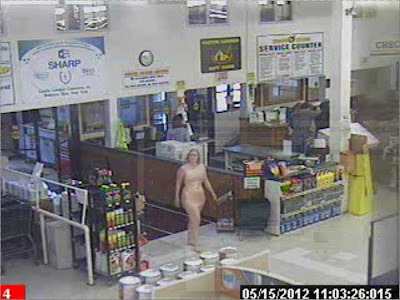 The unidentified woman also went to a Stewart's Shop on East Line Road. "The manager said 'Ma'am, are you aware you have no clothes on?' She was kosher and cool about it, and the manager told her she needed to leave," said a Stewart's employee, who only identified himself as Terry.

By the time the Saratoga County Sheriff's Office picked her up, she had her clothes back on, Eakin said. A sheriff's dispatcher confirmed the woman was charged in the incident, but wouldn't provide other details.

Many thanks Alexa!
Posted by arbroath at 6:08 am
Email ThisBlogThis!Share to TwitterShare to Facebook