A red-faced TV reporter who faked a sand storm when he missed the real thing has become a laughing stock in Romania after his cameraman let viewers in on the stunt. 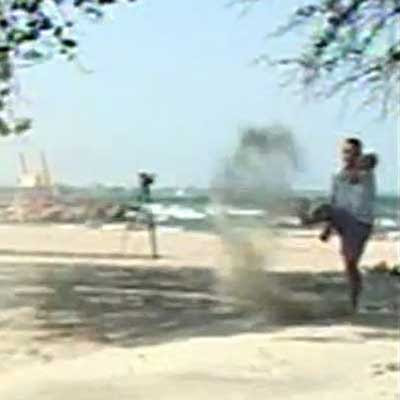 The reporter, from the Realitatea TV news channel, shows the reporter apparently struggling to keep on his feet as clouds of sand hit him while he says: "The wind blows with incredible power, there are moments when it is impossible to stand up here.

"The wind blows the sand at over 60 km per hour. The wind blew away the beach umbrellas and the tourists had to leave in a hurry," he added in the live report from the country's Black Sea coast.

But as he continued the report, his cameraman pans right, a member of the production crew can be seen kicking clouds of sand into the air towards the reporter. The channel has insisted the report was genuine. The reporter claimed: "The report was not doctored in any way. It was a bad joke made by the cameraman."
Posted by arbroath at 6:04 am
Email ThisBlogThis!Share to TwitterShare to Facebook

If you trasnalate what the reporter says is soo clear: Check how my team move the sand to show the strong of the air... come on...

"'Gafa jurna...'
This video is no longer available due to a copyright claim by Adrian Boioglu."