Motorists reported a sharply-dressed pig running loose on the Parkway West in Pittsburgh on Wednesday morning, where state troopers also spotted the animal but failed to catch it before it scurried off into the woods.

The pig seen wearing a scarf was reported just west of the city near the Green Tree exit. The reports came in between 8:30 a.m. and 9 a.m. 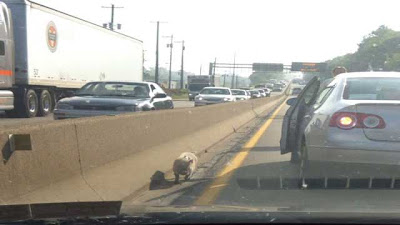 State troopers from the nearby barracks in Findlay Township were able to spot the pig, but couldn't catch up to it.

Police said the pig appeared to be a baby and confirmed it was wearing a scarf. Police don't know why that is or who may own the animal.
Posted by arbroath at 6:08 am
Email ThisBlogThis!Share to TwitterShare to Facebook