An 8-year-old boy survived being swept into a Minnesota drain tunnel filled with rushing water and surfaced in a creek about a mile away. While he was under, it was his mother that was on his mind. "Mom, I thought I lost you," Kenny Markiewicz told his mother, Amber Markiewicz, when they were reunited, she said. "I did what you told me to do. I plugged my nose, I took a breath and I prayed." Less than an hour earlier, Markiewicz feared that she had lost her youngest child. The family had travelled from their Louisiana home to Proctor, Minn., to visit relatives. Proctor is a small town about eight miles southwest of Duluth, a city that has suffered record rainfall this week resulting in its worst floods since the 1970s. 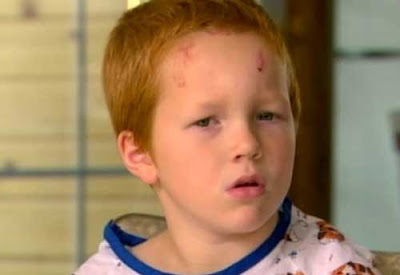 On Wednesday afternoon, it was not raining and the street where the family was staying was not flooded. Kenny and his cousin went outside, walked a few houses down and approached what looked like a regular puddle. "I never ever let my child leave my sight. This was a split second," Markiewicz said. "He just was going across by the puddle and, apparently, there was a culvert or a pipe there and he fell in. We heard my niece scream that and we opened the door, ran down the hill and dialed 911." Markiewicz said that she couldn't see a manhole so she went into the water. "I'm feeling around and then I felt it," she said. "I could feel the rush of water." What she felt was a culvert - a pipe that allows water to flow underground. Because of the recent flooding, the drain was filled with surging water.

Ann Reyelts, a witness, said that frantic bystanders were moving boulders and lifting manholes in hopes of finding Kenny underground. "I just wanted to whip out my super powers and rip up the road," Reyelts said. Despite the efforts, 4-foot-3, 63-pound Kenny was nowhere to be seen and his mother was panicking. "I was frantic," Markiewicz said through tears. "I was going after my son, no matter what the cost. I would have given my life." While some people have told her the ordeal lasted about 20 minutes, she said, "To me, it felt like an eternity." Eventually, a policeman came and told her that a little boy named Kenny had been found and he said he wanted his mom. Markiewicz rushed to a police car to be driven to her son. "All I could think was, 'Oh my God, he came this far,'" she said of the drive.

About a mile away, Gordon Marshall had been at home when he heard a noise. "I heard this shrieking screaming, [it] kind of shakes me up because I got 10 grandkids," Marshall said. He went outside to check the creek behind his house and spotted a little boy "bleeding from the head down." "He was lost, petrified, scared to death," Marshall said. "The first thing I think I said to him is, 'Are you alright? Do you know where you're at?' He didn't. He just screamed." Marshall took the little boy into his house, called for help, bandaged his head and put a blanket around him until police came with his mother. "I just got out of the car and I ran. I just saw my child and my hero," Markiewicz said. "[Kenny] was worried about me. He just goes, 'I knew I had to find you,'" Markiewicz said, crying. She said the situation was an "unreal" miracle and she felt "overwhelmed, relieved, happy." In addition to the cut on the back of his head, Kenny had some bruises and abrasions but was going to be fine. His mother said that he remained a little shaken but joked that he's already getting tired of talking about the experience.
Posted by arbroath at 6:05 am
Email ThisBlogThis!Share to TwitterShare to Facebook

"Kenny and his cousin went outside, walked a few houses down and approached what looked like a regular puddle. "I never ever let my child leave my sight. This was a split second," Markiewicz said. "He just was going across by the puddle and, apparently, there was a culvert or a pipe there and he fell in."

That story stinks worse than a fresh cow patty. It that the best you could come up with?

I agree, Anonymous! Mind you, you're allowed to let them out of your sight. It's a good thing. He ended up working out the problem himself, followed instructions, and he's alright. Scared, but with a life experience under his belt. Let kids roam, it could've been worse but it WASN'T. Don't make up lies to cover your own arse, didn't even need that bit. Well done Kenny!