A high school student has been expelled after being caught with a 35ft (11 metres) long crib sheet wrapped around his body during his university entrance exam in Kazakhstan.

The Borat-style stunt was discovered when examiners noticed the student fiddling inside his clothing before the exam started, say officials. 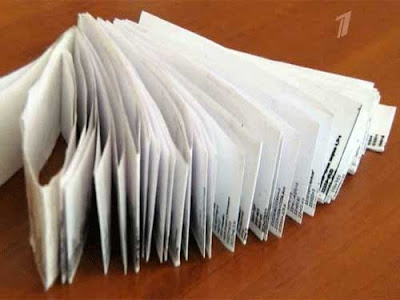 Under his shirt they found a chain of computer print-outs containing 25,000 potential answers to the exam's five topics of maths, history, Russian, Kazhak, and another subject of the student's choice.

Education authority spokesman Bolatzhan Uskenbayev said: "If he'd put half as much effort into studying as he did into cheating he would have sailed through the exam with a distinction. It's a pity too see all that work come to nothing but he cheated, and that's not allowed."
Posted by arbroath at 6:06 am
Email ThisBlogThis!Share to TwitterShare to Facebook