Tourist attraction Wheelgate Family Theme Park in Mansfield, Nottinghamshire, is appealing for help after the surprise discovery of a runaway piglet at the family theme park.

The baby, nicknamed Al by staff at Wheelgate, was found in the Alpaca pen - shocking staff at the park as it does not have any pigs apart from Dave the male Kune Kune Pig. Now, as staff try to trace the piglet’s home, catering manager Jay Bloomfield has taken on the role of surrogate mum to Al, who is thought to be around one week old. 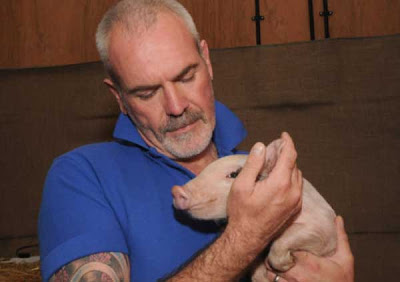 As Al is so young and staff are unsure as to how long he had been outside in the cold for, he has required a lot of TLC, which is usually provided by a piglet’s mother. Catering manager Jay has been taking Al home to keep him warm and provide his bottle feeds at various intervals throughout the night.

He said: “It’s been a long night but little Al seems to be merrily bouncing around this morning.” Wheelgate staff have been contacting all local farms and local farm parks to try locate were Al has come from, but so far they have not been able to trace his home.
Posted by arbroath at 6:00 am
Email ThisBlogThis!Share to TwitterShare to Facebook