Stag-do revellers in Gloucester landed themselves in hot water with police after a kidnap prank went wrong. Officers swooped on a car to rescue a tied-up kidnap victim on Friday morning – only to discover he was a groom on a stag party. The unsuspecting gent was bundled into the back of a car by masked men in-front of shocked onlookers before the two vehicles sped-off.

A horrified mum out shopping with her 14-year-old daughter immediately called police to report the gang, who had their faces covered with women's tights. Officers set off in pursuit of the four men south on the M5 towards Bridgwater and pounced at around 1.30pm as they reached junction 24. Officers were left furious when the 'gang' and their 'victim' were forced to admit the 'abduction' was simply a joke - and all the men were given words of advice. 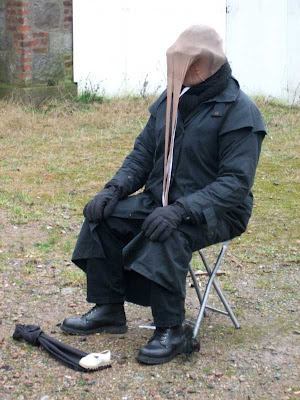 Inspector Arman Mathieson, of Gloucestershire Constabulary, said the men had been told to apologise to the "shaken up" mother and daughter who called police. He said: "We received a 999 call at 11.20am from a distressed woman who, along with her 14 year old daughter, had seen four men with tights covering their faces carrying a tied up man and bundling him roughly into a car. We immediately sent officers to the scene and treated it as a genuine abduction, following up all the appropriate procedures for an incident of that sort. The vehicle was linked to Chippenham in Wiltshire, and was believed to be heading for the M5, so we liaised with our partner forces.

"At around 1.30pm the vehicle was stopped by Avon and Somerset police at junction 24 of the M5, when it was established it was a 'prank' as part of a stag party. We are dedicated to keeping people safe from harm and had to treat this seriously, given the description we were given of what happened and the distress it had caused to witnesses. While we could arrest the people involved in the stag party for various offences, we feel the best course of action might be for them to apologise to the mother and daughter who witnessed this and who were very shaken up by what happened." A spokesman for Avon and Somerset police refused to confirm whether armed police had been present at the swoop.
Posted by arbroath at 6:00 am
Email ThisBlogThis!Share to TwitterShare to Facebook