A New Zealand are $80,000 in debt after he was wrongly diagnosed with terminal cancer and they spent heavily achieving a rapidly compiled bucketlist. Frank, 69, and Wilma, 65, who don't want their surname published, say they had "nothing to lose" after Frank was told in May 2010 that he had only a few months to live. The medical advice turned out to be wrong and though they are happy Frank is alive, their quality of life has been eroded by a spending spree, which included trips to Australia and Fiji.

Frank had part of his lung removed following a brush with cancer, and after chemotherapy started getting chest pains and was short of breath. He had an ultrasound done and fluid was taken from his pericardium - a tissue sac which surrounds the heart - for testing. A month later he was given the devastating news it was likely the cancer had returned to his heart and he only had a few months to live. So Frank and Wilma did what many people would do - they made every day count. 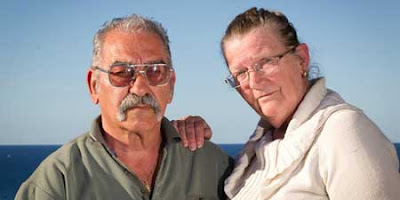 Frank, who used to own a handyman business in Auckland, gave away $30,000 worth of tools, fishing gear, a quad bike, clothes and household items. They sold their house in Wairoa at a loss of $70,000 and cancelled the health insurance. Frank began smoking cigarettes and drinking coffee after quitting during his first cancer diagnosis. The couple went to Fiji for 10 days. They blew $30,000 on food, a five-star resort and fishing activities, expecting his life insurance to cover the costs. "We had a good time. We spent too much money on food, going around New Zealand and then a business which fell down," Wilma said.

"What would you do in this situation? If he said jump I would jump ... I was putting him first, whatever he wanted, he got. I'm short on my credit cards for $80,000 and the money we had left went on a business and that didn't work out so we are broke." Frank had had another ultrasound test in December 2011 - and this cleared him of cancer. But it was not until the hospice worker told him in February that he knew he was in the clear. They don't know why the hospital didn't tell them earlier. The hospital has acknowledged it made an error, but says it made the right call based on the evidence at the time.
Posted by arbroath at 6:02 am
Email ThisBlogThis!Share to TwitterShare to Facebook

I have no sympathy for these people. Who did they think was going to pay for their $80,000 debt? Did they just expect their credit card to eat the cost? That is messed up.

Presumably his life assurance would have covered any debts incurred. Except now he's going to live.

As the article says, they were expecting his life insurance payout to happen "any day now" which would have covered their debts.

To be honest, I'd do the same if I thought I only had months to live.