A 24-year-old woman from Massachusetts is facing federal charges for allegedly masquerading as a teenage boy to have sex with a 15-year-old girl, who was apparently unaware that the boyfriend she met online was actually a female. 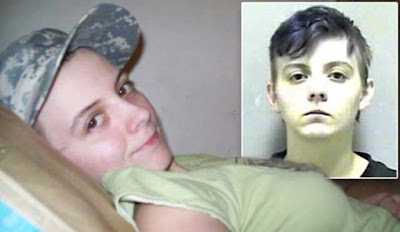 The suspect, Carissa Hads, was arrested on May 24 and charged with travelling across state lines for the purpose of coercing or enticing a minor to have sexual intercourse. Following Hads’s arrest, police said they seized an artificial flesh-coloured penis from the front pocket of her pants that she apparently used during a sexual encounter with the teenage victim.

Full story here.
Posted by arbroath at 6:03 am
Email ThisBlogThis!Share to TwitterShare to Facebook

Just think, this thing has at least another 50 years to live. God only knows what nastiness she'll get up to in that time.