A couple investigating brown liquid seeping through the ceiling of a Brisbane, Australia, house were shocked when it turned out to be honey from a massive bee colony. Property maintenance workers Sue and Matt Eyles took photos and video of the massive hive, which was discovered after the resident complained about the discoloured ceiling. "The tenant in the house had complained to the real estate about the discolouring on the downstairs bedroom ceiling," Mrs Eyles said. 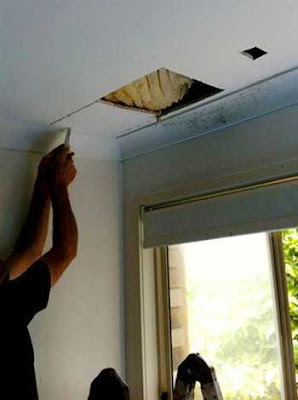 "[They] sent my husband, Matt to have a look. He touched it with his finger and smelled it, and discovered it smelled like honey, so he tasted it. The bees had vacated, and left the hive, so with no bees to eat the honey, it just dripped and soaked through the Gyprock ceiling," she said. "It was massive … there was honey everywhere." Mr Eyles then removed the hives from the ceiling cavity, but the bees returned in February 2012. "Six months later, the tenant reported seeing thousands of bees flying around in the yard near the same room. 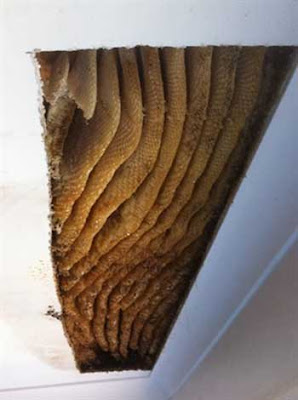 "My husband was sent to investigate again, and he said the noise was horrific - really loud buzzing." The room was by then being occupied by a young girl. Mr Eyles said he smoked the bees out of the ceiling and repaired the holes. Bee expert Dr Katja Hogendoorn, from the University of Adelaide, said that based on the photographs it was likely there were more than 40,000 bees living in the house. She said it was not uncommon for bees to rebuild their hives after they are removed.

"Once something has been used by bees they can smell it, and they are likely to return unless you block it off,” Dr Hogendoon said. She said honey bees can be extremely dangerous, and recommended getting a professional to remove a hive. "Statistically they are the most dangerous animal in Australia," she said. "Don’t go near it, it’s not worth it."
Posted by arbroath at 6:07 am
Email ThisBlogThis!Share to TwitterShare to Facebook

I think there are more dangerous species in Australia,... Box Jellyfish? Some spiders?