A Florida man was arrested on accusations he pulled a gun on his girlfriend after a violent argument in which she broke his bong. Brandon Chviek, 20, of Gainesville, was arrested and charged with domestic battery and strangulation, aggravated assault and possession of drug paraphernalia. Chviek and his live-in girlfriend of six months got into an argument at their residence at the Polos Apartments, said Gainesville Police Department spokesman Officer Ben Tobias.

According to an arrest report, Chviek became “enraged” after his girlfriend broke his marijuana-smoking bong, and he grabbed a handgun, described to police as a semi-automatic .22 calibre with an altered serial number, and threatened her with it. The victim later told police she thought she was going to die. The argument intensified, and Chviek punched his girlfriend hard enough that she hit the ground, Tobias said, and Chviek got on top of her and pressed his forearm into the back of her neck. Then, he flipped her over and choked her until she almost passed out, Tobias said. 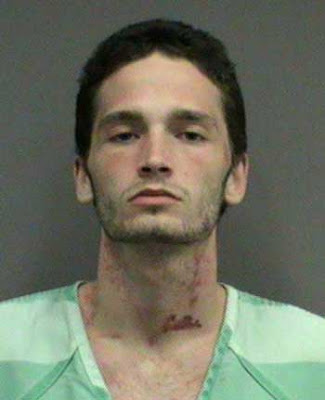 Tobias said the girlfriend showed up at the lobby of the Sheriff’s Office with a noticeable bruise on her cheek and scratches and bruises around her body. Chviek was located at Campus Lodge Apartments, and he gave police consent to search the apartment. According to the arrest report, Chviek initially told police he did not fight with his girlfriend but potentially injured her while he was trying to leave the apartment — in which he claimed she was trapping him. He also told police that not only did he not pull a gun on his girlfriend, but he doesn’t even own a gun.

He had multiple scratches on his face and neck, which the victim said were a result of defending herself and trying to get away from Chviek, police reported. Chviek initially told police he got the marks from goofing off with friends but changed his story afterward, officers said. Tobias said the apartment was in disarray when searched, showing obvious signs of a struggle. Police didn’t find the firearm, but they did find .22-calibre ammunition and drug paraphernalia. Chviek was booked into the Alachua County jail, where he remains in lieu of $27,000 bond.
Posted by arbroath at 6:04 am
Email ThisBlogThis!Share to TwitterShare to Facebook

What a waste of flesh.