Suki Mixon, a resident of the South Carolina Ardmore neighbourhood in West Ashley, has been taking her pet squirrel Zipper on motorcycle rides since she was a baby.

Mixon got Zipper at a very young age and the pair have been inseparable ever since. She says Zipper is a fearless little rider, "When a motorcycle pulls up anywhere, she perks up….thinks it's hers….and she'll fight over it!" 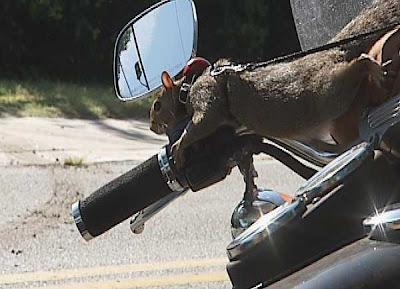 Zipper is also prone to putting her paws over the windshield and checking out the scenery when they are travelling at lower speeds, Mixon added.

The dare-devilish squirrel has caught the eye of many motorists in Charleston, with the unusual sight even causing a few wrecks. "We've had three wrecks… it was cars running into other cars," Mixon said. "People will stop me and say, 'Do you know you have a squirrel?'"