Narcotics police in South Russia’s Rostov Region have unveiled a scheme in which a cat was used to smuggle heroin into a prison, the region’s drug control service said on Tuesday.

The staff of a medical penitentiary facility in the town of Shakhty became suspicious after they noticed that the same black cat was often roaming around the prisoners’ quarters. 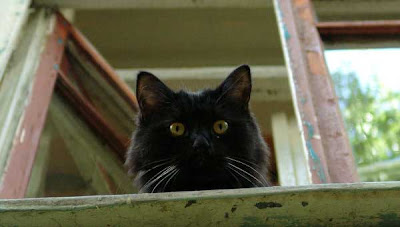 A probe revealed that the cat was taken out of the prison by released inmates. They carried the animal in their bags and handed it over to drug dealers who were waiting outside the prison fence. They stuffed the feline’s collar with heroin and released the animal, who sneaked back into the prison.

“Police and drug control officers detained the accomplices when they were putting drugs into the collar,” a spokesman for Rostov Region’s drug control service said.,The fate of the feline drug runner is unknown. Prison workers say it has not been seen since the arrest.
Posted by arbroath at 6:02 am
Email ThisBlogThis!Share to TwitterShare to Facebook