A bulimic woman who inserted a butter knife down her throat to prove she has no gag reflex landed in an Atlanta emergency room instead.

The 30-year-old woman was attempting to show her friends the trick when the knife slid down and lodged itself inside of her throat. The New England Journal of Medicine published X-ray images showing the knife lodged in the 30-year-old's esophagus. 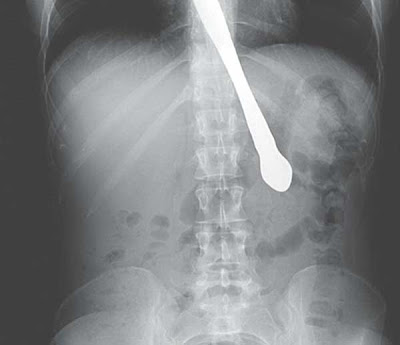 She rushed to the emergency department at the Emory University School of Medicine in Atlanta, vomiting blood and complaining of chest pain. Doctors used a camera to delicately extract the knife.

Surprisingly, it's not the first time she has attempted this trick. Four years ago, she tried the same stunt and needed surgery to remove the knife. The woman was transferred to a psychiatric unit after the knife was removed.
Posted by arbroath at 6:07 am
Email ThisBlogThis!Share to TwitterShare to Facebook