With four banks robbed in less than three months, the Edmonds, Poulsbo, Redmond, and Stanwood Police Departments in Western Washington are collaborating to catch a bank robber dubbed the “Duct Tape Bandit.”

The robber is wanted for thefts at the Whidbey Island Bank in Stanwood on May 24, a KeyBank in Pouslbo on June 7, a Wells Fargo in Edmonds on June 20 and a First Citizens Bank in Redmond on Aug. 8. 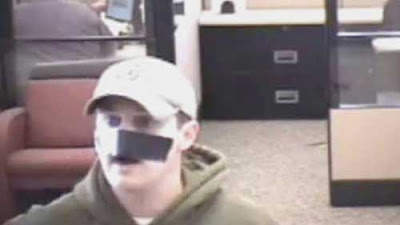 In all four robberies, the man showed a gun and demanded money be placed in a white cloth bag. Police say he attacked a customer and employee during the robbery in Stanwood.

The man is described as in his mid 20s with short, light brown hair, about 5 feet 10 inches tall with a thin to medium build. Police believe he might have a tattoo on the inside of his left leg.

With news video.
Posted by arbroath at 6:10 am
Email ThisBlogThis!Share to TwitterShare to Facebook