Tucked away in the refrigerator and carefully wrapped in foil is a half-eaten breakfast tortilla with an image of Jesus Christ. At least that's what 80-year-old Ernesto Garza sees. It was a typical morning for Garza, who attends La Amistad Adult Daycare in Beeville, Texas. He walked into the cafeteria to have his usual bacon and egg breakfast tortilla.

The flour tortillas are all hand made by cooks at the facility. Garza sat down and unwrapped his tortilla. This time around he was only going to eat the inside of the tortilla. After poking around he said he noticed a face staring back at him. “I looked at it for five minutes,” Garza said. In disbelief, he asked a friend next to him what she thought the face on the tortilla looked like. 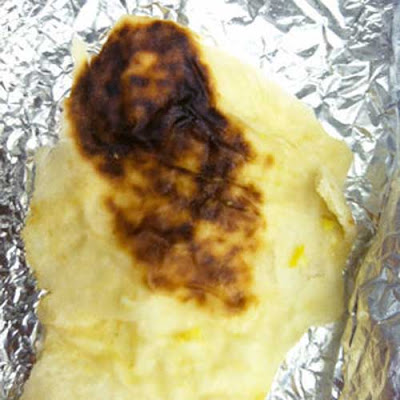 Garza’s friend looked at it and jumped from her seat. "Jesus," she said. It wasn’t long before everyone at the adult daycare heard about the Jesus tortilla. “I consider it a blessing because it’s unique.” said Angie Rodriguez, the director of the adult daycare. Rodriguez said the phone at La Amistad has been ringing off the hook with surrounding media outlets wanting to know more about the “miracle.”

For Rodriguez, this has especially touched her heart. She has been going through some turbulent times and said that the night before the discovery she had prayed to God for a sign. Sure enough, she said, Garza found Jesus on his breakfast bacon and egg tortilla. “We believe God works in mysterious ways,” Rodriguez said. Garza said he’s planning to preserve his image of Jesus as long as he can. “It’s a blessing from God,” he said.
Posted by arbroath at 6:03 am
Email ThisBlogThis!Share to TwitterShare to Facebook

I think Jesus needs to concentrate on ending hunger and wars instead of face planting all this food. That goes for the virgin Mary, as well.

No no no; it's obviously Lars Ulrich in his early days. Gorgeous hair.

it's Ian Anderson from Jethro Tull