Koala paddles across river and climbs aboard passing canoe 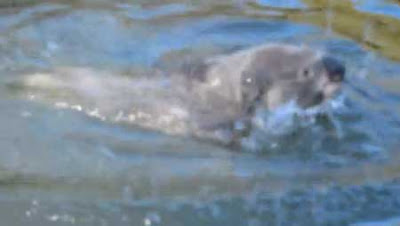 The koala was caught on camera swimming across Burleigh Point and up to a stunned group of local paddlers, joining them in the canoe. Julie Elliott, who filmed the rare encounter, said she and her colleagues from the local Outrigger Canoe Club were amazed when the koala came paddling towards them.

"It took a sip of water and then saw us and obviously decided to come straight over," she said. "Then it started clawing at the boat and we didn't know what to do."

"We were thinking it was going to drown so my mate behind me just grabbed him and put him straight in the boat." The group later released the koala on an embankment at a local golf club where koalas were known to populate the gum trees.

There's a news video, including interview with Ms Elliott, here.
Posted by arbroath at 6:05 am
Email ThisBlogThis!Share to TwitterShare to Facebook