An Australian man who suffered serious burns when friends lit a firecracker in his bum says he was just showing his visiting mates a Territory good time. Alex Bowden, 23, of Wagaman, Darwin, put a spinning "flying bee" winged firework in his butt crack during a party at a rented house on Rossiter St, Rapid Creek on Saturday night.

His mate Todd Lovell lit the fuse. "I had a few lads up from Queensland and I had to put on a good show," he said from his hospital bed. "I just had a few beers with the boys and let off a few firecrackers. And I put one in my arse." Mr Bowden was wearing trousers at the time and took it standing up. "It didn't burn my balls or my back," the fitter and turner said. 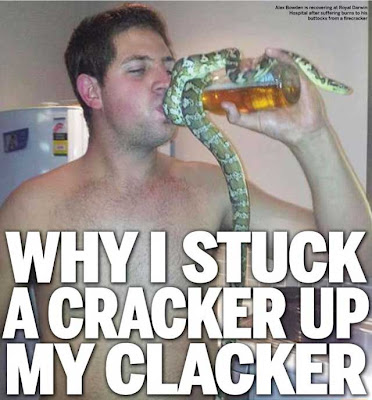 "Just my fingers and my arse. It was a pretty loose one, hey." The cracker burned his bum cheeks, and his index, middle, and ring fingers on his right hand - which he used to pull the cracker from his crack. Mr Bowden was not bleeding after it and he could walk afterwards. His mate Reece McEwen said: "He screamed a little bit and there were a fair few f-words".

But Mr Bowden denied that there were tears. "You can't sit here crying," he said. His sober mate then drove him to the Royal Darwin Hospital burns unit where he is expected to remain for a few days. He is in a stable condition. Mr Bowen added that his mother "thought it was funny".

Previously.
Posted by arbroath at 6:04 am
Email ThisBlogThis!Share to TwitterShare to Facebook