Authorities in California are looking for whoever taped a turtle to several balloons and sent it flying in an Oceanside neighbourhood. The incident happened last Sunday afternoon. The turtle was spotted duct-taped and dangling from balloons that were caught high up in a eucalyptus tree. Some neighbours next door saw what was going on and tried to help the turtle. 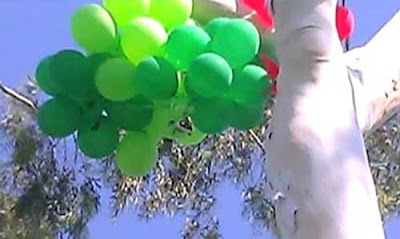 "We look up and there's green and blue balloons up there," said resident Chanelle Wright. "He was just swinging his arms trying to get out of it. Somebody had taped him to the balloons." Wright said: "I called the Humane Society to try to get the fire department out here, but it took about an hour for everybody to actually show up." In the meantime, the turtle hung dangling in the wind. That's when Joel Rabagos' mother got out her camera and started taking video of the hanging turtle.

"When something like this happens, she always takes the video camera, no matter what it is," Rabagos said. The Oceanside Fire Department eventually arrived with a big ladder truck, but as they were about to rescue the turtle, a gust of wind blew him down to earth. A Humane Society employee cut the turtle free from the balloons. The employee said it was a box turtle. The animal wasn't physically hurt, but both Wright and Rabagos are outraged that anyone could treat an animal in such a cruel way.

"What were you thinking? I mean, a turtle is still life. There's no reason to be putting him up in a balloon and sending him off," Rabagos said. "It's animal abuse. If you didn't want the turtle, give it away, take it to a pet store," Wright said. The turtle is now being held at the Oceanside Humane Society while an investigation is conducted. If detectives can find out who taped the turtle to the balloons, they could face charges of animal abuse.

There's a news video here.
Posted by arbroath at 6:10 am
Email ThisBlogThis!Share to TwitterShare to Facebook