Vengeful bull gores man to death, follows him to hospital, then turns up at his funeral

A bull bided its time and gored an Indian man to death when an opportunity came a day after the latter had thrown hot water on it. The bull followed the man when he was being taken to a hospital and later appeared at the crematorium during his funeral in little-known Deori Township in Sagar district of Madhya Pradesh.

The bull apparently kept a watch on frail Bhoop Narayan Prajapati, 65, and attacked him when he was having his morning tea, a day after he had thrown hot water on it for sitting in front of his hut. Prajapati ran inside his thatched hut to escape, but the bull followed him, pushed him to the ground twice and gored him. Neighbours, Bhura Khan and Nikhil Soni, came to the rescue of Prajapati. They hit the bull with sticks to scare it away. 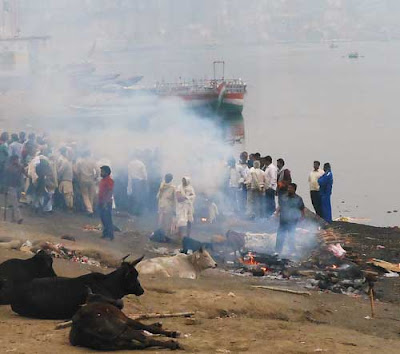 When the bull was out of sight, they rushed the him to a nearby hospital where he was pronounced dead. He died due to internal injuries to his stomach and chest. Much to people's surprise, the bull arrived at the hospital following Prajapati. Deepak Chourasia, a town-dweller, said that when the remains of Prajapati were being consigned to flames the bull again sprang a surprise by arriving at the crematorium. Prajapati's house is very close to the hospital and the crematorium is less than half-a-kilometre away, Chourasia added.

There is history between Prajapati and the bull. Six months ago, the bull had attacked him after he hit the animal with a stick. Prajapati was at that time admitted to a hospital where he stayed for more than a month due to leg injury, Deori police station inspector R P Sharmasaid. "I have also come to know during investigations in the case that the bull followed Prajapati to the hospital and the crematorium. It's something strange and surprising," Sharma said. "We are going to write a letter to the civic body to put this bull in a government shelter," the inspector added.
Posted by arbroath at 6:03 am
Email ThisBlogThis!Share to TwitterShare to Facebook