A woman called the police after a waitress at a Rhymney Valley cafe told her she smelled. June Morris, of Tredegar, was taken aback by the insult which was dished out by a waitress working at Plaza Cafe in Blackwood Bus Station, South Wales. The 61-year-old said: “I couldn’t believe it. I don’t smell. I was always taught by my mum and dad to keep myself clean.” Jim Edwards, owner of the cafe, said that the comment was “just a bit of banter” but was prepared to offer the woman a free meal by way of an apology.

Ms Morris, a regular at the cafe, said that it was her friend who first heard the comment. “Me and my friend went up to the cafe where we often go,” she said. “Sometimes we have a dinner there but this time we just had a coffee and tea and toast. I asked my friend if she would mind going to get a loaf of bread and then she said that the waitress passed and said that I smelled. 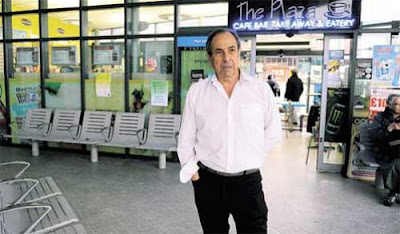 “She said to ask her what she said as I hadn’t heard it. When she came back I asked her and she said that I smelled. I couldn’t believe it - I went up to the manager and said and they said that she was only joking and just laughed it off. But I didn’t find it very funny at all when it was a cafe full of people. I took great insult at that – I don’t smell.” Ms Morris then contacted the police who she claimed brushed the incident off. “They just didn’t do anything about,” she said.

A spokesman for Gwent Police, said: “Officers were called to a cafe at Blackwood Bus Station to a report of anti-social behaviour. The staff member received suitable advice.” Jim Edwards, owner of the cafe, said that the comment was “just a bit of banter”. “The woman is a regular of ours,” he said. “The comment was said in jest. It was a completely misunderstanding. She was a having a joke and it is a type of cafe where everybody has a laugh and a joke as opposed to some cafes which are very straight-laced. I have reprimanded the girl, but she is a nice girl and she wouldn’t have meant it.”
Posted by arbroath at 6:02 am
Email ThisBlogThis!Share to TwitterShare to Facebook

The story left out an important detail... did she, or did she not, smell??

Seconded! We must know these crucial details! I call for an independent olfactory enquiry!!