North Korean authorities have formally repealed a long-standing public order forbidding women from riding bicycles in urban areas. A source from North Pyongan Province said: “This August, approval for women to ride bicycles was handed down by the state.” It is not clear upon whose authority the public order has been withdrawn; nevertheless, according to the source, “People have welcomed it, saying that ‘penalties imposed by the father are being lifted by the son.’”

The repressive measure was first imposed by the regime of Kim Jong Il in the 1990s. Kim is said to have decreed it after hearing news of the death of Oh Hye Young, the daughter of Gen. Oh Geuk Ryeol, a vice-chair of the National Defence Commission. Oh had been hit by a car while riding a bicycle in downtown Pyongyang. A public order was immediately issued to set out the decree. Under it, 2m-wide bicycle lanes were established and a system of bicycle registration was brought in that required the display of numbers on each registered bicycle. 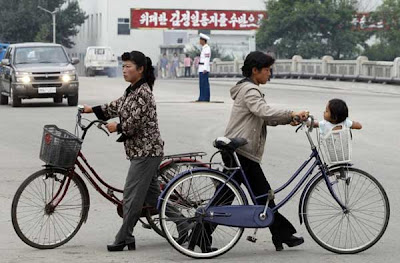 Those caught violating the order in Pyongyang were normally fined 1000-5000 North Korean Won, (£5-£25, $8-$40), though repeated violation may have led to a bicycle being confiscated. Though it was allowed to lose much of its power in provincial areas at the beginning of the 2000s, the Central Party still cyclically reasserted the order, something that led to temporary crackdowns nationwide.

In educational television dealing with the subject, the idea of a woman wearing a skirt while riding a bicycle was described as contrary to socialist custom. For the the majority of families ownership of a bicycle in North Korea is still seen in much the same way today as ownership of a private car in the developed world. Most of those bicycles in circulation are of Chinese or Japanese origin; finding an indigenous North Korean bicycle is extremely hard.
Posted by arbroath at 6:05 am
Email ThisBlogThis!Share to TwitterShare to Facebook