A cat weighing in at 41 pounds (19 kilograms) is in need of a new home after being rescued in a US garden. 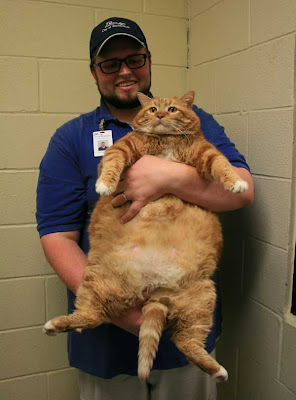 A Dallas-area animal shelter has cared for the five-year-old orange tabby - called Skinny - since getting a call about a stray in a garden about a week ago.

Kim Chapin, of Richardson Animal Services, said Skinny is "very sweet" - and the largest cat she has seen in 21 years with the shelter. US government growth charts show Skinny weighs about as much as the average four-year-old child.

Ms Chapin said Skinny appears healthy except for being overweight and probably having diabetes. Blood tests have been ordered. Ms Chapin added that somebody had apparently been caring for the cat but officials are not sure who owned the huge kitty.
Posted by arbroath at 6:06 am
Email ThisBlogThis!Share to TwitterShare to Facebook