The passengers on board a horse-drawn carriage ride in the Swan Valley, Australia last month got more excitement than the brochure advertised when the flashing lights of a police motorcycle pulled them over. Swan Valley Wagon Trails operator Ross Gundry was at the reins when he was pulled over and fined $250 for being on his mobile phone while operating the wagon. Mr Gundry (56) said he was flabbergasted when pulled over by the motorcycle patrolman and issued with the ticket.

“I’ve been operating all over Perth in the wagon trail business for more than 25 years and I’ve always used my mobile phone, believing that a horse-drawn vehicle was OK,” he said. “After all, I’m only travelling at 2km/h.” He said nine-year-old Toffee had regularly driven the Swan Valley route for the past four years and could “probably do it on her own”. “I hardly drive them at all,” he said. 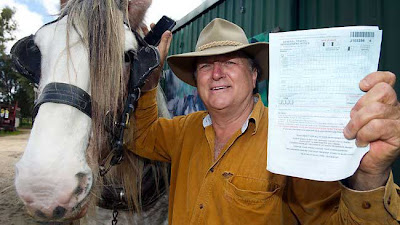 Wording in Section 265 of the Road Traffic Code relating to use of mobile phones was changed in March 2011 from “using a mobile phone while driving a motor vehicle” to “using a mobile phone while driving a vehicle.” Mr Gundry reluctantly accepted the ticket but is seeking legal advice on whether he should contest the matter. “The law is the law and if I don’t know the law that’s bad luck,” he said. “However, there has to be some common sense.” Mr Gundry said a “reasonable man” would have pulled him over and issued a verbal warning.

“There’s no such thing as community policing any more,” he said. “It’s pure revenue raising, that’s all this is. I’ve been around in the Swan Valley for 14 years, so the least the policeman could have done is warn me the law had changed,” he said. Mr Gundry said he grew up in the country with police “you respected and felt safe with”. But it was obvious things had changed. “If police want to be respected they should respect the public and use common sense, too,” he said.
Posted by arbroath at 6:03 am
Email ThisBlogThis!Share to TwitterShare to Facebook