A man sought emergency treatment at hospital in Auckland this week with an eel stuck up his bottom. The unnamed individual presented himself at the A&E department at Auckland City Hospital to explain his embarrassing problem.

It is believed the patient was sent for X-rays and a scan, which showed there was an eel lodged inside him. "The eel was about the size of a decent sprig of asparagus and the incident is the talk of the place," a hospital source said. "Doctors and nurses have come across people with strange objects that have got stuck where they shouldn't be before, but an eel has to be a first." 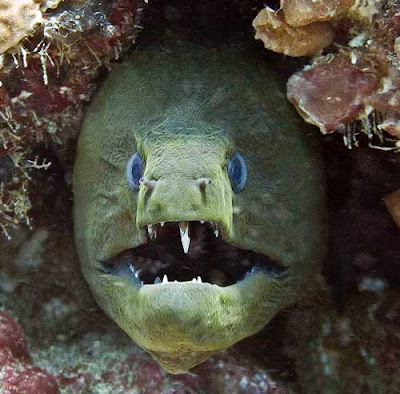 It is unclear how the eel managed to be trapped inside the man. It is believed medics successfully removed it and the man was later discharged. A hospital spokesman confirmed the bizarre incident had taken place.

"We can confirm that an adult male presented at Auckland City Hospital this week with an eel inside him," Matt Rogers, spokesman for Auckland District Health Board, said. He added: "No further comment will be made out of respect for the patient's right to privacy."
Posted by arbroath at 6:07 am
Email ThisBlogThis!Share to TwitterShare to Facebook

"All I did was sit down in the water during my vacation. It was million to one shot, doctor."