Worshippers at a Sikh temple in Punjab’s Doaba region, India, are getting a real spiritual high by giving miniature aircraft as holy offerings to make their dreams of foreign travel come true. Thousands of devotees who flock to the the Shaheed Baba Nihal Singh Gurdwara in Talhan, see the model aircraft as a symbol for a wealthy, jet-setting life. 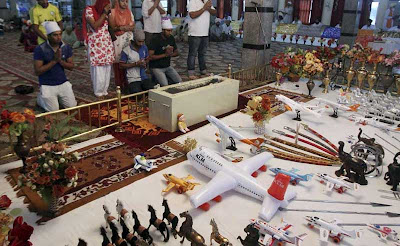 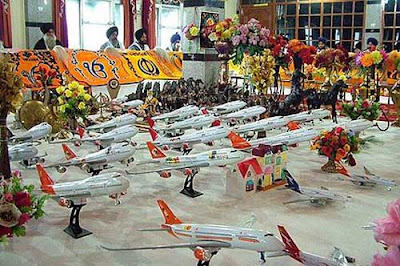 Priests tell them that a plane is a guarantee that they will soon be flying themselves, and even the village gates have a concrete British Airways jet above them. Roads leading to the temple are full of shops selling models of airliners from BA, Air Canada and Lufthansa. 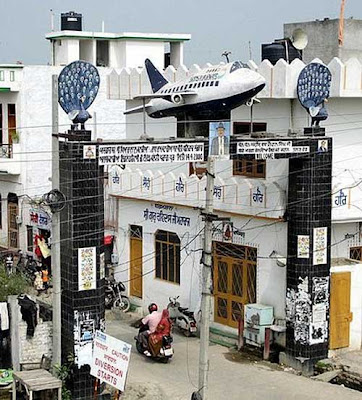 "Many worshippers have family who have emigrated to Britain, Canada, America or Germany and their dearest wish is to join them there," explained head priest Bhai Manjit Singh. "The planes are a strong symbol but God needs true feelings too," he added.

The Doaba region has an estimated six million of its people settled abroad The region flaunts palatial houses and farmhouses, with gigantic water tanks on the roofs, many of them in the shape of a huge aeroplane. A local shopkeeper said he cannot recollect how and when the trend started. “Surely must have been someone’s wish to go abroad coming true that must have started it all. It’s now became a tradition. For us it’s business,” he said.
Posted by arbroath at 6:09 am
Email ThisBlogThis!Share to TwitterShare to Facebook

Great blog. This was really helpful stuff. I wish you luck as you continue to follow that passion.
https://www.kanhaijewels.com/category/american-diamond-cz-jewellery

Oh my goodness! Awesome article dude! Thanks, However I am having troubles with your RSS. I don’t know the reason why I cannot subscribe to it.
smok g priv accessories