Charlotte County Sheriff's Major Crimes Unit detectives arrested Port Charlotte woman, Amanda Jean Linscott, 26, on Tuesday morning and charged her with Armed Robbery after a September 3rd incident where she allegedly pulled a gun on a man she was having sex with while he was driving a vehicle. The incident began on Sep. 2 when the victim and his two friends went to the Paddy Wagon Irish Pub in Port Charlotte, Florida. When the bar closed they invited two girls they met to one of the friend’s home.

One of the women and the victim went into a bedroom to have sex. The girl said she needed $250, which he said he didn’t have. She asked how much he had and he gave her $120. The victim then went to the bathroom and when he returned, found the two women had left the home. The victim had obtained the woman’s cell phone number earlier at the bar and called her; they agreed to meet at the Pick N Run store on Peachland Boulevard. When he got there he expected to meet the woman who took the $120. Instead, Linscott walked up to his Nissan Sentra and said the other girl ditched her. 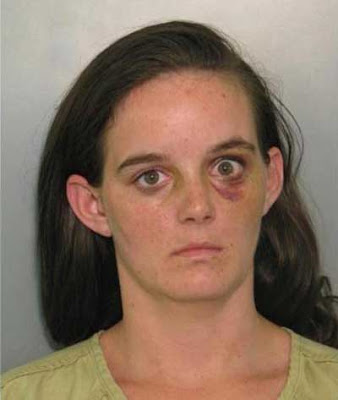 Linscott got into his car and as they drove off, he said she began touching him and having sex while he was driving. The victim told detectives she also said she needed money and he told her he already gave her friend $120 earlier. The victim said Linscott then put a .357 Taurus revolver to his head and demanded money. The victim grabbed the gun and a fight ensued in the moving car; he said he punched her in the head so she would release the gun. He told detectives he was in fear of his life and lost control of his car, struck a palm tree, went airborne and then ran across two front yards. Linscott got out and fled the scene.

The victim was able to drive his wrecked vehicle to his two friends’ home and told them what happened. He gave them the handgun and then called CCSO. As road patrol deputies responded to the area, an elderly man, identified as Linscott's father was in the driveway of Linscott's home and told deputies that his daughter had been in a vehicle crash and had been punched in the face. Statements were taken from all parties involved and detectives began their investigation. Based on the statements and evidence, detectives arrested Linscott and transported her to the Charlotte County Jail where she remains on no bond.
Posted by arbroath at 6:08 am
Email ThisBlogThis!Share to TwitterShare to Facebook

I lol'd at that mugshot.